MPs are allowed to claim money to pay you because they need your support to carry out their parliamentary duties: not to promote their political party. This can be a slightly grey area at times, but the bottom line is that deviation from those rules is a misuse of expenses.

Similarly, when constituents give you and your MP their personal details in the context of the MP-constituent relationship, the Information Commissioner’s Office has rules against using that data in political marketing. Information on these two points is important and details are given below.

IPSA have issued some guidance on this which can be found on their website.

See chapter 3 of the MPs’ Scheme of Business Costs and Expenses for more details.”

Try and make time to read the guidance from the Information Commissioner’s Office on ‘Promotion of a Political Party’. The ICO is the independent authority whose job it is to promote access to official information and to protect personal information.

The ICO has a broad definition of what constitutes ‘marketing’ and treats the promotion of political parties as such. Therefore, the guidance below has significant implications for the way you contact constituents.

The Information Commissioner’s guide includes direct mail by post, email, phone and fax, text messages and automated calls. As a Researcher, it’s important to know the basics and if you’re a Constituency Organiser – or even Caseworker who mucks in around election time – it’s vital you follow the guidance.

Promotion of a Political Party (latest version, April 2005) can be found here: https://ico.org.uk/media/for-organisations/documents/1589/promotion_of_a_political_party.pdf

Here are the opening couple of paragraphs; click on the image to read the rest. 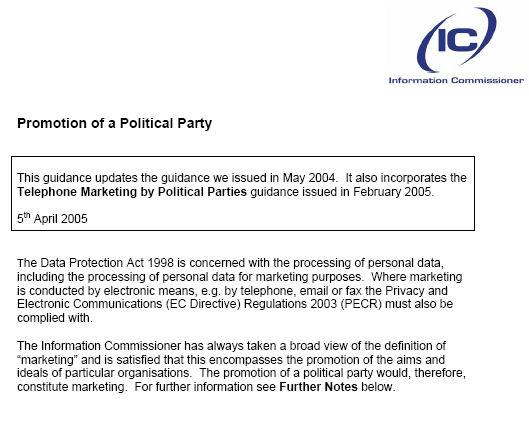